We started out the morning bright and early making our way to the Senior center where we would take a bus to the Long Beach Catalina Express Depot.  My Momma had arranged for the three of us, herself, Jon and I to go along with the Senior group for a Catalina Island excursion.  We would have most of the day to ourselves with just one meet up in the afternoon for an inland island tour.

The bus ride to Long Beach was quick, we waited just a few minutes before lining up to board the boat.  Jon and I were going to try and tough out the potential sea sickness but I decided last minute to purchase some pills just in case.  Jon and I took one pill each right before we boarded the boat.  We were living the life of luxury, sitting at the very top of the boat in the Commodores Lounge where we received the royal treatment with beverage service.  Jon napped most of the way while my Mom and I carried on a nice conversation.  I woke Jon up once to show him the baby dolphins we saw playing in the ocean along side the boat.  The ride itself was nice, comfortable but somewhat choppy.  My Momma mentioned that this is the worst she has seen it in a while, since she was in her thirties and she ended up rolling across the boat (hehe).

We made it to the shore safely and were ready for some breakfast.  We headed down the main drag, Pebbly Beach Road to Crescent Avenue until we got to Catalina Avenue and made a left.  Just a few shops down was Original Jack’s Country Kitchen, our first stop.  The walk is a little less than a half a mile from where the Catalina Express docks and takes about 5 minutes.  I had done some research on Yelp prior to our trip to find some of the best eats and this was one of the restaurants I definitely wanted to hit.  We got seated right away which surprised us quite a bit considering it was a Saturday morning aroung 11am.  We weren’t complaining though, as we were all super excited because we were quite hungry!  We browsed the menu and decided on the Chili Size (Momma), Monte Cristo (Jon) and the Eggs Benedict (Me).  The chili is delicious, comes with beans or without and it is super flavorful.  The Monte Cristo was good, the best part being the french toast it was made with, the only thing missing was the ham.  And the Eggs Benedict hit the spot, nothing will ever beat my Momma’s homemade version but this definitely did not disappoint, the hash browns were great too!  All in all everything was super yummy!  The portions are big and the prices are reasonable considering they do have to import everything, it is an island after all.  I would highly recommend Original Jack’s for breakfast if you find yourself on Catalina Island. 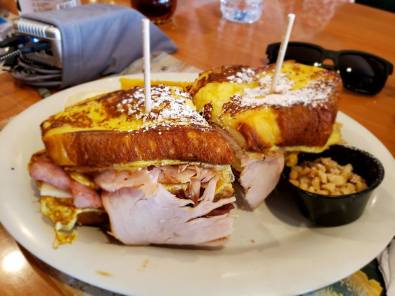 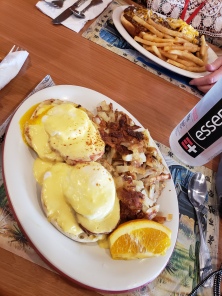 Next we made our way down to Cartopia Golf Cart Rental located just a short distance back towards the direction of the dock on Crescent Avenue.  Come to find out, from my understanding, all of the golf cart rental locations (I believe there are three in total) are owned by the same company.  This location was the closest to us, so this is the location we chose.  We only had to wait in a short line before we were helped out and I have to say the customer service was wonderful.  After asking a few questions we decided on the rent a 4 seater for two hours with the understanding that we could return the golf cart anytime after the first hour and before the second hour (two hours being the max rental period) for a pro-rated price.  The total cost for the two hour time slot was $90, $45 to be paid by credit card and $45 in cash.  We were handed our map and made our way towards the south part of the island on Pebbly Beach Road towards you guessed it, Pebbly Beach and Lover’s Cove are located, both of which are beautiful.  We made a sharp right turn onto Wrigley road where we climbed a hill to a few beautiful scenic overlooks for some great picture opportunities.  We also got to see the famed Wrigley Mansion which must have the most amazing views.  We made our way back down into town passing a pet cemetery and neat rock garden which we should have took pictures of.  Riding through town was pretty neat as we made our way to the Casino and Descanso Beach Club.  We parked right in front of the Casino and headed down the stairs to pay it a visit.  Unfortunately it was closed but we were able to get some nice pictures of the tile murals along the walls.  We jumped back into the golf cart and headed down just bit further to the Descansco Beach Club which is for sure on our list to hit next time.  It looked like a lively place with a nice beach, cabana and chair rentals as well as a restaurant and bar to enjoy.  After that we decided at just a little over an hour it was time to return the rental as the rest of island in which we could explore within the travel limits of the golf cart agreement would probably be covered on the bus tour that we would be taking in about an hour or so. 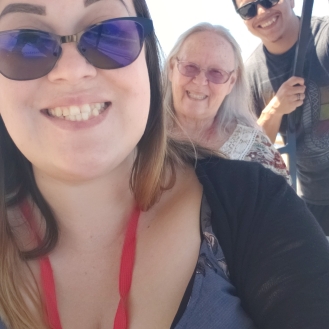 After returning the Golf Cart we headed back down on Crescent Avenue to Luau Larry’s to grab a quick drink and maybe a bite to eat.  It was a bit frustrating trying to find a place to sit because there is no waiting list, or order to seating at all from what I could tell.  Luckily after a bit of maneuvering we were able to find a seat in the back of the restaurant and we greeted promptly with menus.  I had read all over the place about the Island’s signature drink the “Buffalo Milk” and I really wanted to try it as it sounded just like something I would enjoy.  So with that being said, I ordered the Buffalo Milk, Jon ordered the Wiki Wacker, which came with a free straw hat and my Momma ordered a Coke.  I have to say I wasn’t impressed with the Buffalo Milk at all, I expected it to be much better but I should mention their ingredient list was a bit different than the one linked on the Catalina Island official website, so maybe that was it.  Jon also ordered a clam chowder in a bread bowl and it did not look appetizing or taste appetizing at all.  Let me tell you, I have never met a clam chowder I did not like until that day.  Overall Luau Larry’s was a miss for us.

We made our way back to the dock to meet up with the group for the inland island bus tour.  The bus was nothing fancy but it was comfortable.  Our tour guide made the tour, he was super friendly, informative and made sure we were able to take the pictures we wanted.   I wish I knew the name of the tour, but since the Senior Center booked it, I do not know.  We made our way up past the gates into the Catalina Island Conservatory area which used to be an old stage coach route.  It was quite bumpy and very narrow, but we felt safe the entire time.  As the tour progressed we were fed more interesting information, given picture opportunities and even saw a heard of bison crossing the street in front of our bus!  Wow, was the super cool!  We reached the peak of our tour when we made it to the very top where the airport is located.  The airport hosts a small gift shop and restaurant which was unfortunately closed by the time we got there at 4:30pm.  They serve several buffalo options such as tacos and hot dogs which would have been interesting to try and may be on our list for next time, however I think you can only get here by tour, so keep that in mind.  We made our way outside on the patio of the little restaurant and got to see the most adorable little Catalina Island fox who was so docile and allowed us to take a copious amount of pictures.  Before too long we were told it was time to get back on the bus.  We made our way back down to Avalon where we had just a couple of hours before boarding the boat back to the mainland.

We decided on Catalina Island Brew House, which wasn’t on my original list of places to hit, but I was in the mood for Pizza and remember reading about this restaurant through my earlier research.  We had also passed by it earlier in the day and it looked good so this ended up being our choice for dinner.  The seating is self serve and this time we had no trouble finding a seat.  You order at the front and they bring the food to your table.  While we would have loved to try their beer offerings, we were much too warn out to go there, so that will be something on our list for next time.  We decided on the pepperoni flatbread and the barbecue chicken flatbread, both of which were delicious.  We were worried that two would not be enough for the three of us, but it was plenty, they are big!  The service was great and the food was amazing, so this is definitely a win and we will be back.

After some good food and nice conversation we made our way back to the dock to catch the boat back to Long Beach.  The ride was much smoother, although the boat did depart a bit late which caused us to arrive about a half hour after schedule.  All and all this trip was amazing.  We are so thankful to my Momma for bringing us along and showing us a good time.  Catalina Island is a beautiful like oasis away from the hustle and bustle of the mainland and we can’t wait to go back and explore more.