Well, well, an eventful year it has been already.  We started off the year with our second IUI cycle which unfortunately didn’t result in baby.  Then Jon got sick, and I followed soon after.  The illness was weird and mimicked more allergy like symptoms, and then we noticed that we only felt bad when we were home, which was even more strange.  Convinced it had to be something either in our apartment, or maybe right outside, we decided to do some investigation. We recalled that our next door neighbors had moved out about a month earlier due too mold they found in their apartment.  Some of our other neighbors had some mold issues early last year as well.  Convinced that must be the culprit, we started looking.  At first glance we noticed nothing but then we started to pull out our furniture to see if we could find anything and low and behold, there was mold on the wall behind the entire length of our bed.  Gross I know.

Jon was on it.  He took pictures of the mold and quickly sent them to the property manager before we had to rush off to work.  Luckily the property manager responded just as quickly and later that day the mold remediation specialists were out to inspect the area.  They explained that they would send the findings to our landlord and we would hear back from him soon to arrange the remediation process. 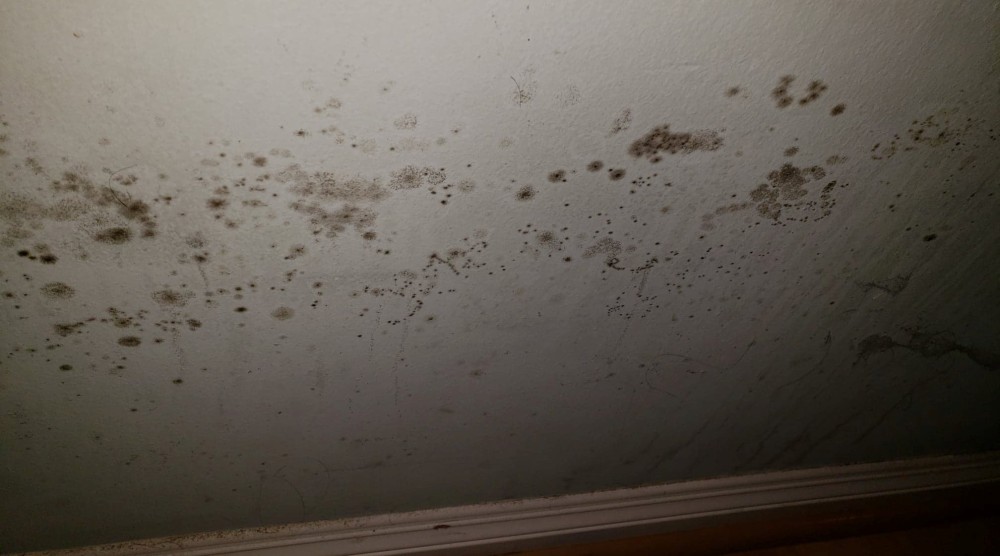 We heard back pretty quickly and arranged the remediation process for the next week.  Luckily I was able to work from home otherwise I am not sure what we would have done.  We decided not to push it with the landlord, as he is not the easiest to deal with and told him we would stay in the living room of our tiny apartment.  We were also nice enough to save them some money by allowing them to store the contents of our bedroom throughout the rest of our apartment instead of requesting storage at an offsite location like some of our neighbors had done.

In preparation for Monday, the first day of remediation, we spent the weekend measuring and then planning where everything would go.  After some thought we decided we would move our king size bed into our living room and place it on the floor so we would have somewhere to sleep other than the sofas or floor.

Monday came around and it was time for things to start.  I was expecting the team to come in at 8am, but they did not show until around 10am.  We had moved some of our things prior to them coming in, but when they showed up the moved the rest.  It was literally the most organized process I have ever seen.  Everyone had their place and knew exactly what to do.  After moving the bedroom contents out of the room that we requested they sealed up and covered the rest in thick plastic as to not get those things contaminated with the spores that would travel once they opened the wall.  They taped down butcher paper throughout our apartment so that they would not drag in any dirt, which we appreciated.  Next the team sealed off the door.  It looked like something you would see in that one Matt Damon movie where he was on Mars.  The Martian, that’s it!  It was sealed well with a zipper that allowed them to get in and out easily.  They sealed themselves in the room, and the banging began.  Literally about 30 minutes later they came out with a trash bag full of mold ridden drywall and insulation.  They set up a dehumidifier in the room and explained that another company who conducts the mold testing would be out either the same day or the next.  After they did their testing we would have to wait to hear back that the room was clear and then the would come back to finish up.  They left for the day, and there I was left in the chaos waiting for the guy to show up to complete the testing.

The rest of the day came and went and the guy never came.  We made the most out of a uncomfortable situation and decided we would call this new sleeping arrangement a sleep over.  We laid in our now cramped living room on our king size bed, ate keto snacks, played some Mario Kart and watched some movies.  It wasn’t so bad… the first night that is.

Tuesday morning rolled around and we woke up bright and early.  Jon (with his big muscles 😉) lifted and leaned the bed against the wall so I at least had room to move around throughout the day.  As Jon left for work, I got ready and prepared for the mold testing company to come do their testing.  Around 10am, I began to get impatient as I had heard nothing.  The company was maybe to come the day before, and here we are at 10am the next day with no communication.  I texted the Albert, of the mold remediation company and asked for an ETA of the other company because I did not know how to get a hold of them.  He explained that Manny, from the testing company would be in around 3pm.  All I could think to myself was ugh, that means a whole other day would go by without any work being done.  I was getting worried that this whole situation would drag out longer than expected.  Manny showed up around 3pm, and did his testing.  He explained that we would get the results back the next day.  And of course, I hoped those results would come back sooner rather than later.

Jon came home from work, we made dinner and settled into our cramped space for the second night.

The next day, Wednesday, around 12pm, I began to grow impatient as I hadn’t heard anything.  I texted the Albert (of the mold remediation company) to inquire if they had received any word of the results.  Nothing.  I remembered that Manny (of the mold testing company) had left his card on the table so I decided to grab the business card and give him a call.  I wasn’t going to wait for things to happen.  When I called you could tell he was annoyed.  He told me that by the end of the day we should have some sort of answer.  Nice, another day with no work.  I texted Jon what I was told and he texted Albert.  Low and behold, just a few minutes later as I was about to text the property manager of my concern with how things we progressing, I received a call from Albert.  He explained that they got the unofficial all clear, but that we still needed to wait for the certificate to come through.  At this time he also explained that his guys would show up later that day to clear the room and pick-up their equipment but that they did not do the drywall repair.  WHAT? They don’t do the repair?  That meant that we would need to wait for the property manager to send out the drywall guy.

Knowing that I wasn’t trying to extend this schedule any longer and the fact that I was supposed to go back into the office for work on Friday I got on the phone with Brett, our property manager to let him know we got the all clear and asked if we could schedule the drywall guy to come out.  He was irritated with the fact that I followed-up with him before the mold remediation company did.  Oh well, we wanted our life back.  He said the drywall guy would give us a call to arrange the repair and that he wanted no part of the scheduling.  Whatever dude, just get our apartment fixed.

The mold remediation guys came around 7pm that night to clear out the room, remove the butcher paper from the floors and clean up.  They were so nice, and we really appreciated how kind they were.  After they left we went into the room to see what had been done.  Drywall had been removed along the entire bottom quarter of the contaminated wall.  Wonderful, an exposed wall, no call from the drywall guy.  It was a waiting game now. 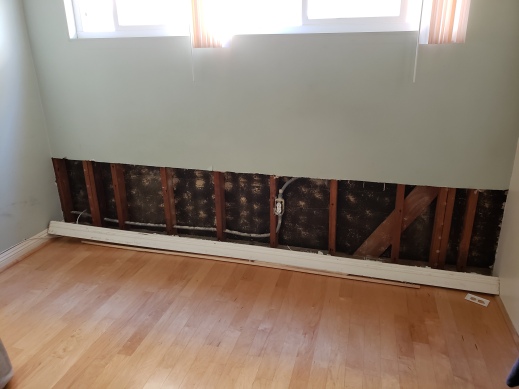 We decided to move back in some of furniture to at least give us a little bit of normalcy, which I have to say helped.  It made things a LITTLE less cramped.

Half of Thursday had passed by and we will had heard nothing from the drywall guy.  I texted our property manager and got no response.  Jon called and left a message too.  About 30 minutes after Jon’s message we got a call from the drywall guy, surprise, surprise.  I can’t help but feel there was some sexism involved throughout this who situation.  Things didn’t get done until Jon got involved which I found annoying.  I asked the drywall guy to come out that day, he said he could not but to send him some pictures and he would come out the next day.  Oh, but he doesn’t paint the wall, that’s another guy.  OMG, are you serious?  Anyway, we came to the resolve that we would have to spend another night at least, in the living room.

I sent along the pictures and quickly got a call back.  I guess the job was a simple one that wouldn’t take as much time as he expected and he asked if he could come out that day.  Well OF COURSE you can.  He came, fixed the wall and left by 5pm saying that of course Brett would be sending the paint guy by tomorrow (Friday) to finish the job.  Sure.  By this time I had already requested to work from Friday in anticipation of the work not being finished when it was supposed to.

Jon got off work and we decided that the wall was dry enough that we would move all of furniture, including our bed back into the room.  We were NOT going to spend another night on the floor in the living room.  If the pain guy decided to show up on Friday he could just move the furniture away from the walls while he painted.

It was SOOOOOO nice to be able to finally be back in our room.  It was the first night we had gotten a decent nights sleep all week.

On Friday I waited for the paint guy to call or show up, nothing of course.  I knew that was going to happen.  The paint job wouldn’t be so easy, our room is teal (it was this color when we moved in).  To paint the repaired area would either mean they would need to color match the rest of the room or repaint the entire room.  I was done following-up and decided that if they wanted it painted they would need to contact us.

And so now, almost a month later it is still unpainted and we have yet to be contacted.  We are now in the process of looking for another place to live as we are so over this!

Two months into the year, and we’ve already been through the ringer.  I have a feeling this is going to be a very eventful year.  Here is to hoping it’s a good eventful…