I woke up a bit earlier than usual at 10 days past IUI.  I was determined not to test early this time but something changed this morning.  I grabbed a test from beside my bed and ran to the bathroom where I took the test.  I was so hoping it would be positive.  I mean we got pregnant naturally before, why wouldn’t we during IUI when all the conditions were right?

Well I did a few things around the house and went back to check the results.  I moved the test back and forth hoping to see a very faint line in the light but nothing, no pink line just disappointment.  I have to say that I took it fairly well, as much as I thought this would be it, our cycle, I prepared myself for the all too familiar disappointment.  I tried to hold out some hope until my blood test because maybe it was just too early to detect anything.

Around 3:30pm or so the results finally came in.  I clicked open the results on Kaiser’s website and I couldn’t believe my eyes 14mIU which means it’s positive.  There was no way, I had tested twice and got negative results.  I e-mailed my doctor to be sure and it was confirmed I was pregnant!  She suggested that I go in on Wednesday to ensure that the HCG level has doubled which indicates a progressing pregnancy.

I waited to tell Jon, I wanted to do something so special for him.  In the world of infertility rarely does an opportunity come around where you have the ability to surprise your spouse with the results.  I looked on Amazon for a onsie that has something cute on it, but nothing would get here on time.  I knew I just couldn’t wait until the next day, so I ran to Carter’s after work to look for something there but they didn’t have anything either.  Luckily there was a Party City across the way and so I went in there and got a bunch of balloons, red, orange, yellow, green, blue and purple to symbolize this rainbow baby we had been praying for.  I also got the cutest balloon of a baby and some more that spelled out the word DAD.  I was so excited to surprise him.

Getting all those balloons in my tiny car was quite a feat but I managed to do it.  Getting them out once I got home was just as challenging but I did it!  I walked in our apartment, Jon giving me a look of confusion and I said come here, look!  He came around and looked at the balloons a little confused at first, but then he got it, he said no, no way, really?  And we hugged and cried for this baby we prayed so hard for. 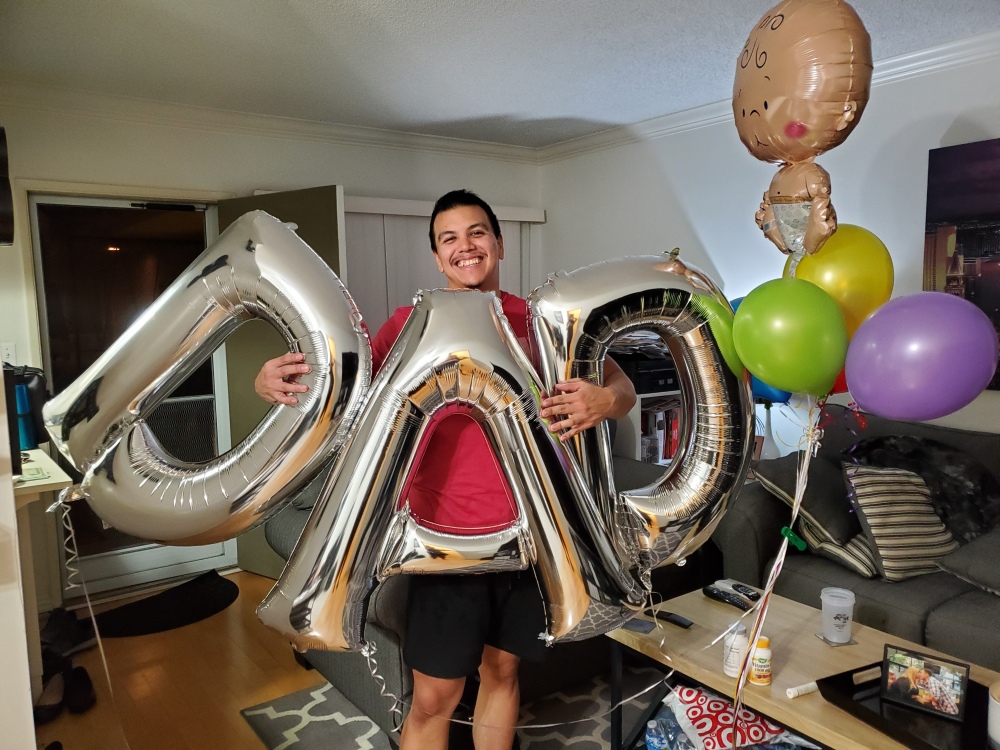 Jon immediately jumped into Daddy mode, researching online for the best stroller, bottle sanitizer, etc.  It was adorable.  We talked about how things were literally perfect, this baby was our missing piece.  With our new home being built, we planned  how we would decorate the nursery, reconfigure our backyard design to accommodate what would be best for our baby, and so much more.

We texted my Mom, Jon’s Dad and my sister to share the news.  They were through the roof with excitement.

The next morning we woke up just as happy, Jon kissed my belly before leaving for work.  I went to work and told my closest co-workers (I hate calling them that, they really are some of my closest friends).  They were so excited for me, for us.  However, shortly thereafter, something was not right.  I started to get some cramping, but I knew that was normal for early pregnancy.  I went to the bathroom and when I wiped, there was the all too familiar light pinkish blood that I had seen during our last pregnancy.  I wiped again, this time darker blood.  The volume wasn’t there but I was still concerned.  About an hour later, I went to the bathroom again and wiped again, and there was more blood.  This wasn’t a one time thing, and I knew what was happening.

I asked to work from home the rest of the day.  To be honest, I was already concerned that my HCG level was too low when I read the results the day before but I tried to stay positive, but I knew what could happen.  And later in the evening it did happen, I started bleeding much heavier, there was no way that this was normal.

I went in on Wednesday to just to confirm that we lost the pregnancy and just as we had suspected, we lost our baby.  Our second miscarriage.  I don’t understand, I don’t get it.  It’s not fair, why can’t we have a healthy pregnancy?  Jon and I cried, I apologized for disappointing him (he of course reassured me I didn’t).  I just feel so bad that I got his hopes up for nothing.  What is wrong with me?

We scheduled an appointment with our RE the following week to see what we could do in the limited time before our big move.  I wanted to be tested for everything, I wanted to know why this was happening and how we could avoid this same situation from happening again and again.

Thank you all so much for your love and support.  Losing two babies in the span of six months is heart wrenching.  The only thing that keeps me going is knowing that they are in heaven with God and we will get to hold them in our arms someday.